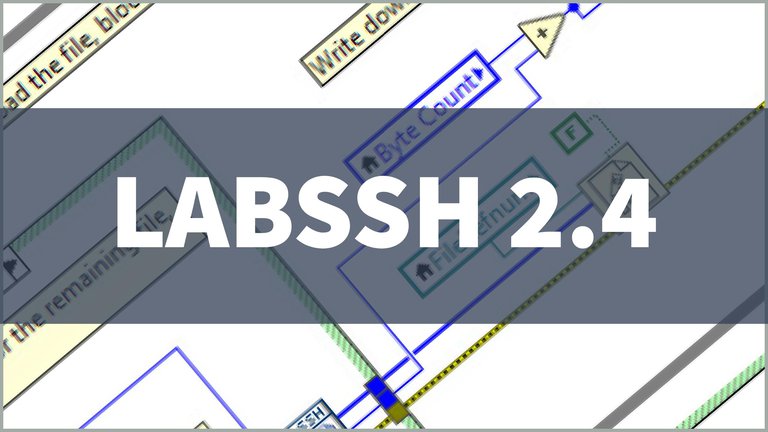 Well, LabVIEW 2017 has been released, and that means LabSSH is right here to support the latest and greatest LabVIEW. This upgrade is FREE to all existing LabSSH customers.

v2.4.0 is a minor release, which means it retains backwards-compatibility with previous 2.x version.

LabVIEW 2017 is now supported by LabSSH. This includes:

Starting in v2.4, the following files are now implemented in pure-LabVIEW:

To be clear, it's "pure-LabVIEW" in the sense that the application logic is LabVIEW code, even though the socket and protocol support is handled by the low-level LabSSH functions.

Previously, each of these functions called directly into labSSH.dll, which itself looped until the file transfer was complete.

For large file transfers, this led to the entire LabVIEW UI thread being blocked from execution until the file transfer was complete.

In a future release, we're planning on adding more functionality to these VIs, such as real-time external progress reporting and control over the transfer. This change lays the foundation. Stay tuned!

Init.vi Now Has a Block Diagram

In prior releases, Init.vi had its block diagram stripped. This limitation was due to the way the licensing system was set up in the early days.

Why was this a problem? When building applications using the LabVIEW application builder, it would force the user to perform otherwise unnecessary extra steps (specifically, unchecking the "Disconnect unused inline subVIs" and "remove unused polymorphic VI instances" in the build settings).

Because of this limitation, it was also not possible to build certain distributions at all. For example, a packed project library was simply not possible to create with LabSSH.

Not an ideal user experience!

With 2.4, we've simplified the Application Builder experience and made it easier for you to build the distribution that suits your needs best.

As always, you can find the latest version at the download page.